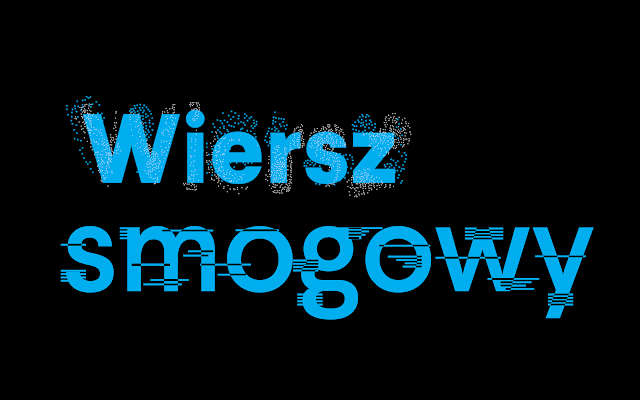 It is browser plugin available at Chrome Web Store (and it's free).

“Smog Poem” is a text and graphics generator that uses the data on the environmental pollution to change the tissue of the text, its graphic elements, and other components depending on the pollution’s intensity. The algorhythm has a form of an internet browser plugin; after its installation, the users browsing through the internet will experience the air pollution in front of their own eyes through the glitches appearing on the websites they use, the replacement of the photos and text modification. Some articles will be replaced by a separate generated text based on the syntactic mechanisms and by using the rules of the “Game of Life” by John Conway.

The piece consists of two main engines. One mechanism is pulling data on the actual air pollution with Particulate Matter (PM 10 and PM 2.5), Nitrogen Dioxine NO2, Sulfur Dioxide SO2 and Carbon Monoxide CO. Each of those indicators is responsible for a different element distorting the content. The second mechanism is responsible for the upload of data from the websites and its modification depending on the particle pollution. If the air quality does not exceed the norms, the content of websites remains unchanged.

The algorhythm is representative of the growing trend of digital art based on resources and presenting them in a way to influence the user’s consciousness. It refers to the concept of ‘data dramatization’ by Liam Young, who once said: ‘Data Dramatization, as opposed to data visualization presents a data set with not only legibility or clarity but in such a way as to provoke an empathetic or emotive response in its audience.’

Any cookies that may not be particularly necessary for the website to function and is used specifically to collect user personal data via analytics, ads, other embedded contents are termed as non-necessary cookies. It is mandatory to procure user consent prior to running these cookies on your website.